Halibut Cheeks and the Interconnectedness of All

Posted on November 25, 2010 by Marahm
Last night, I ate halibut cheeks. I couldn’t have imagined that the cheeks of a fish would provide enough substance for a meal, but I hadn’t known that halibut is one of the largest fish in the ocean. It can grow to eight feet long. Its cheeks are actually thick, as thick as the backsides of other fish. 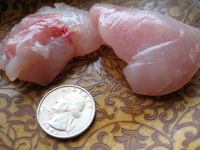 We went to a seafood restaurant for dinner. As I was not too hungry, I decided to try something new. Our server described the cheeks entree, cooked with a ginger-teriyaki glaze, served over a bed of herbed rice and fresh pea pods with carrot slivers. Curious to see whether the cheeks of a fish included bones or cartilage, and whether its meat had substantial density, I ordered the dish.
It arrived as described. The cheeks looked like giant commas, and had no bones or other inedible parts of fish anatomy. The texture resembled that of scallops— stringy, tender, sweet and white. Every bite dissolved in my mouth, full of flavor, and I couldn’t even finish the dish. I took it home for this morning’s breakfast.
I’ve eaten lots of fish, especially during my Riyadh years, but I’d never heard of halibut cheeks, and now I am hooked!
Where had that fish originated? I forgot to ask, but I presume from Alaska. I wondered how the fish grew, where it swam, what it ate, and how it encountered the net which started the journey that ended in my stomach. Neither that fish nor I ever imagined we’d be joined, especially in such an intimate manner. An image came to mind, the image of the butterfly that flaps its wings in Japan, and initiates a chain of events that culminates on the other side of the world.
The interconnectedness of all species continues to intensify, as humans extend their influence throughout the natural world. Such a tremendous responsibility falls upon us as a species, yet how often do we think about it? How often do we realize that even our haphazard actions have an effect that ripples through the world beyond our private experience?
The reverse concept also applies. How often do we acknowledge the chain of events that occurred to make possible the experiences of a moment? Do we even give attention to the fact that all moments are but consequences of the moments preceding them? Do we consciously act in the awareness that our actions set in motion a particular path, and that at every moment, our individual choices can alter those paths?
We all know that this is true with regard to big events. We know about the driver who drinks and causes an accident, injuring the person who happens to be at the wrong place and time. We’ve heard about the right lottery ticket bought casually along with a tank of gasoline, and we may have experienced the meeting of eyes across a crowded room.
A  fish swimming in waters off Alaska ends up giving its cheeks to my stomach. While the consequences of this event affects just me, the fish, and the parties in between, it illustrates the veracity of the concept. Everyone, everything, is connected and interconnected, whether we are aware of it or not, whether we behave consciously or unconsciously, deliberately or haphazardly.
The significance of this realization informs us that even our most casual actions, such as eating, are both the result and the continuation of processes that began long ago and will continue.  We may not have absolute free will, but we do contribute to the alteration of paths, the modification of conditions, such that we put a paintbrush to our lives and the lives of those around us. We are all artists in the most fundamental sense of the word.
Happy Thanksgiving!

At first glance, I may appear to be a middle-aged American woman with kids, grandkids, retired from a job in a hospital, gratefully relieved from the responsibilities that come with all of that. Behind the image, which is true enough, I am fairly unhinged from much of American mainstream living, having spent twelve years in Saudi Arabia, years that sprung me from societal and familial impositions, and narrow bands of truth. I have learned to embrace my identity as a seeker, an artist, and a writer. I study Arabic and Italian language, because I love them, and I love their people. I still dream of spending more time in the Middle East and Italy, though the dreaming now seems more real than the possibilities. I am a photographer. I write, and sometimes publish, flash memoir, and now a blog or two.
View all posts by Marahm →
This entry was posted in Life. Bookmark the permalink.

4 Responses to Halibut Cheeks and the Interconnectedness of All