One of the interesting tourist attractions in the United States is the Renaissance Faire:

Last weekend I joined my daughter and her family at the Bristol Renaissance Faire on the border of Illinois and Wisconsin. It is a remarkable event, with re-creations of Renaissance events, costumes, music and activities, The actors recreate various activities of the period, maintaining the accent and vocabulary of the Renaissance.  They mingle freely with the guests, invite them to participate, address them as, “My lord,” and My lady.” They enjoy having their photos taken: 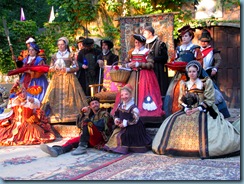 We spent a wonderful afternoon, meandering throughout the wooded grounds, watching the games, admiring the costumes, listening to the music, examining the clothes and jewelry for sale, smelling the roasted meat and fried everything else, deciding and deciding again what we’d eat. A musician played an instrument called a spinet, answered our questions graciously, and even allowed my son-in-law to sit and press a few keys.

Then we ate tempura shrimp and vegetables, which wasn’t very medieval, but we were not tempted by turkey legs. Not long after Maghrib, we headed back to the entrance, because the Faire would close before dark.  A harpist sat at her instrument on the dirt path, plucking the strings and making beautiful music, so we stopped, along with other people. My son-in-law admired her instrument, and stroked its frame.

She jumped up and inserted herself between him and the harp, shouting, “NEVER, EVER touch my instrument without permission!” She glared up at my tall son-in-law, and he glared back, not sure whether her outburst was part of the medieval act, as was her costume and music. We stood there, uneasy, and she continued, “THIS is a FIVE THOUSAND DOLLAR instrument! You DO NOT touch it without permission!”

Indeed, her harsh voice had drawn an audience, and she seemed as though she were acting, especially since my son-in-law did nothing except stroke the frame. He might have left  a fingerprint, but probably not.

Her eyes flamed, and she growled in a low voice, “I am SERIOUS!”

“What’s going on here?” I said. My son-in-law did not speak, but my daughter said, “Are you supposed to be a witch?” My son-in-law remained speechless, but his facial expression showed his confusion and disappointment.

The musician raised her arm and pointed over his shoulder, saying. “Now GO! I will NOT play for you,” and turned her back on us.

We slunk off, grumbling, the light mood of the day broken, but I felt anger rising. How dare she embarrass my son-in-law, and speak to him with such contempt!? I turned back to get her name, thinking I’d write her a nasty letter if I stayed angry long enough. She saw me reading her CD labels, and said, “COMPLAIN AWAY! Just don’t touch my instrument.”

I might have let the incident go, had she not gilded the lily with that last remark.  I turned to confront her.

She sat down and started playing energetically, smiling at the guests who tossed dollar bills into her box. I looked at her instrument, at her tip box, at her CDs, and back at her. She was not about to stop playing, as long as I was standing there, so I said to the male with her, “There are ways, and there are ways to ask someone not to touch the instrument.  Perhaps she could pull it out of the path of the people, or erect a gate, or at least a sign. We were very offended at her behavior. Will you tell her that for me?” No immediate response. “WILL YOU TELL HER FOR ME? OK?” He said, “OK”, and I left.

Half an hour later, at the exit gate, I was approached by a woman who identified herself as the “Head of Guest Relations” and asked if I were the woman who gave the musician a hard time.

“SHE gave US a hard time!” I shouted, realizing that the harpist had reported me. After a few heated words between us, the Head of Guest Relations listened to the whole story, and thanked me for telling it. She said, “I’m going to address this issue right now,” and took leave of us, and we took leave of the Faire.

I was angry all the way home, so angry that I missed my exit, thus delaying my return by at least twenty minutes. I forgot about fasting,  Ramadan, good intentions, peace, love, patience, and everything good.

Finally home, I went straight to the computer and looked up the musician’s name. I will not mention it here, since bad publicity is better than none, but I noted that she came with impeccable credentials and accomplishments.  I read everything I could find on her, and found that she had a good reputation, and many fans. Why had she attacked my son-in-law?

Three days later, needing all that time to get over the anger, I felt sorry for her. An accomplished musician, she was beautiful, but so full of herself that she didn’t mind lording it over three admirers who could have walked away blessed by her music instead of soured by her mean-spirited arrogance.

The incident drove home a reality that must not be forgotten when attending these Ren-Faires (as they are so called):  fantasy reigns. The embroidered gowns and lilting language can charm a guest. The gentle sounds of musical strings and breeze through the trees can lull a lady into a smile, and charm a gentleman into fascination with the facade.

Take delight in the images, let the music pull your imagination along, snap some photos, enjoy the show, but don’t peek behind the veil of illusion, lest a lovely harpist rise up and roar. 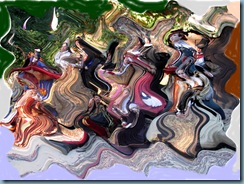 At first glance, I may appear to be a middle-aged American woman with kids, grandkids, retired from a job in a hospital, gratefully relieved from the responsibilities that come with all of that. Behind the image, which is true enough, I am fairly unhinged from much of American mainstream living, having spent twelve years in Saudi Arabia, years that sprung me from societal and familial impositions, and narrow bands of truth. I have learned to embrace my sense of identity as a seeker, an artist, and a writer. I study Arabic and Italian language, because I love them, and I love their people. I still dream of spending more time in the Middle East and Italy, though the dreaming now seems more real than the possibilities. I am a photographer. I write, and sometimes publish, flash memoir, and now a blog or two.
View all posts by Marahm →
This entry was posted in Life, Rant, Writing and tagged Bristol, fantasy, harp, harpist, Renaissance Faire. Bookmark the permalink.