Recently I bought a new camera.  While learning how to use it I took dozens of photos that were out of focus, badly composed, underexposed, and not worthy of holding  space on my hard drive. I deleted a dozen of them before I realized I could edit them, play with them, apply filters and distortions, change color saturation, lighting, etc., and end up with something totally different from the original, and much nicer to view! Here is one of my creations: 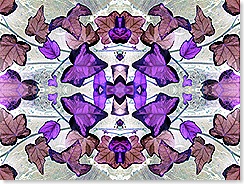 This started out as a green vine against a tree stump. 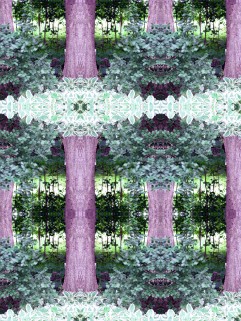 This one started out as a tree trunk with some plants growing around it.

I’ve got lots of photos of my grandkids. They are very hard to photograph because they move around constantly, and when they see the camera, they close their eyes because they know a flash is coming!

The kid photos make for interesting creative effects. Here’s one that started out too ordinary to keep:

My daughter is sitting with her daughter on a swing. My daughter refused to smile. She she made an ugly face and thought she ruined the photograph, but she didn’t!

I’ve done some realistic ones, too. This is one of my favorite flowers, the fuchsia: 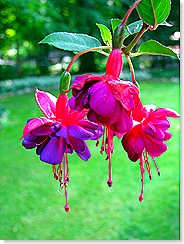 Last week, a thunderstorm approached mid-morning. The sky became dark as night, yet the sunlight still shone in the distance. I went outside and took a few photos to capture the effect. Here is my favorite:

I suppose I’ll have to start a Flickr account now, like those of you who have inspired me to try creative photography.  You know who you are:  ~W~, Unique, Aafke, Shahrzad, Susie! I’ve already got nearly one hundred photos, and they’re all different, some of them not even in purple or green!

At first glance, I may appear to be a middle-aged American woman with kids, grandkids, retired from a job in a hospital, gratefully relieved from the responsibilities that come with all of that. Behind the image, which is true enough, I am fairly unhinged from much of American mainstream living, having spent twelve years in Saudi Arabia, years that sprung me from societal and familial impositions, and narrow bands of truth. I have learned to embrace my sense of identity as a seeker, an artist, and a writer. I study Arabic and Italian language, because I love them, and I love their people. I still dream of spending more time in the Middle East and Italy, though the dreaming now seems more real than the possibilities. I am a photographer. I write, and sometimes publish, flash memoir, and now a blog or two.
View all posts by Marahm →
This entry was posted in Art and Literature and tagged art, photography. Bookmark the permalink.